Off the Silver Path: Of Street Lights and Boogie Men

December 03, 2017
So this isn't exactly what this blog is normally used for, and for those of you coming around to find game tidbits I'm sorry. This was my first exposure to shaping combat (not that I understood that at the time), and serves as a perfect example of how you can fight the Dreaming and her children without resorting to Banality.

This is a story my mother told me when I was very young. She wrote the story out for me several years ago, and it's been tickling my mind recently, so I decided it was time to dig it up. The images are intended to be child like, but I know they're a bit awkward. They're an old project I did with this story and I've been thinking about my mother and Changeling a lot recently so I wanted to get this out there in all of its rough around the edges glory. There are a lot of stories out there about Changeling children raised by parents who don't understand them, who are all too often Autumn People. I know Changeling is fundamentally a tragic story, but sometimes a Fae child is fortunate enough to have a Kinain parent, and this is in honor of all of those parents, and the lift they do for their children.

When I was little I came home from school one day filled with strange horror stories told to me at school about the Boogie Man.

I asked my mother about them and she told me all about the Boogie Man, about his ugly face and dark scary shadow.

She told me how he liked to come out at night to scare little children, but she told something else as well . . .

She told me the Boogie Man’s secret. 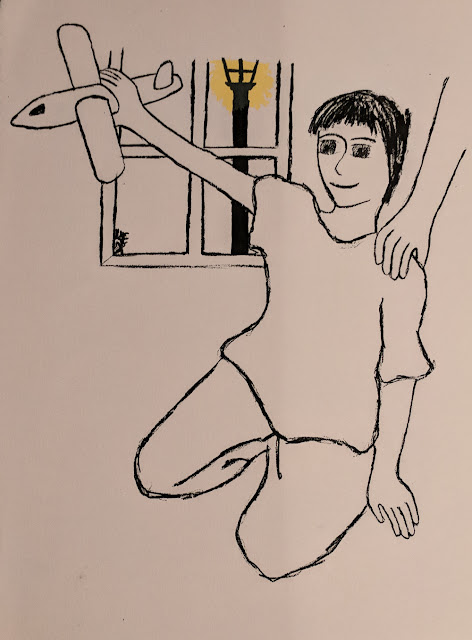 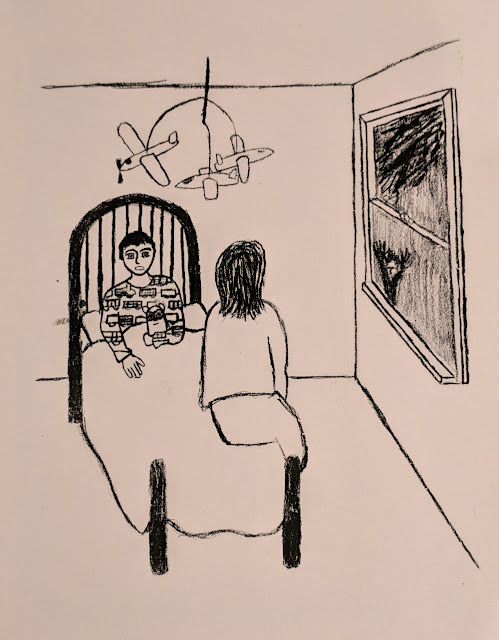 “You see, the reason the Boogie man only comes out at night is he’s afraid to move around in the daylight. Everyone would see how tiny he is.”
Victor’s mom pulled the curtain to his window to one side, “But at night, it’s dark and hard to see him, and the Boogie Man only walks in front of street lights. See how long the shadows from the street lights are?”
Victor looked out his bedroom window at the long street lamp shadows.
“Everyone thinks the Boogie Man is big and scary because his shadow is so long, but only his shadow is big.” 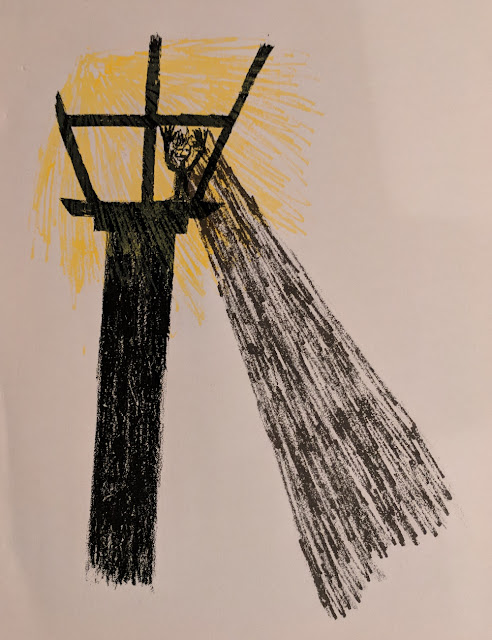 “If the Boogie man does squeeze under the front door he could never reach you in your tall bed,” said Victor’s mother.
Victor smiled a big smile, “For real mom?”
“For Real Victor, but I don’t think the Boogie man will come to your room.  I think he’s afraid of you.” said Victor’s Mom.
She turned out the light and kissed Victor on the head. Victor got into bed and fell fast asleep.
The Boogie Man stayed outdoors all night, under the street light. 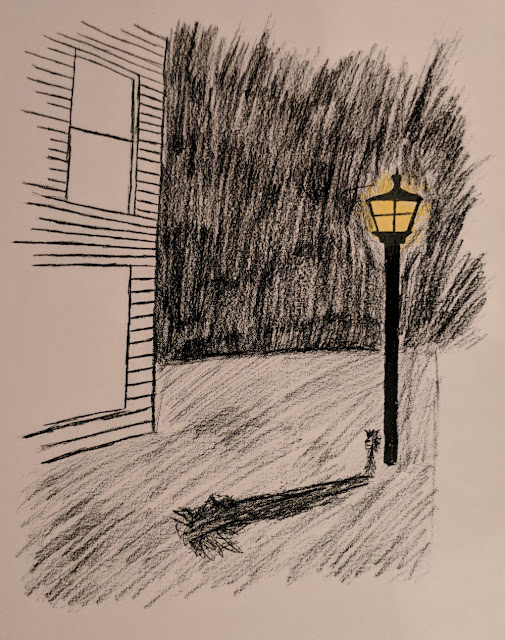 Popular posts from this blog

November 13, 2017
What Is This? The Nightmare Incursion system is meant to make the threat of accumulating nightmare points immediate and thematic. Written mostly before C20 was available, this system was originally an expansion of the 2nd edition Nightmare rules. While C20 went in a different direction with what nightmare does to a changeling the system they wrote is not very threatening in short or one-shot games. Nightmare incursions provide the possibility of nightmare accumulation, even in one-shots, having serious ramifications for characters. In longer games, nightmare incursions give the storyteller (and players) another tool for developing the stories they’re telling. As we’ve played with the system and refined it from its original form we’ve found that some of our best sessions revolved not around our characters’ dreams, but their unresolved nightmares and baggage. Unexpected deep dives into a changeling’s shadow can build some amazing stories.All that said, these rules aren’t for every table.…
Read more

Pushing Simon's house rules for interregnum seemings out the door. These rules extend tentacles into a lot of different parts of the game -- a big part of this deals with the more open Kith system that our game uses. I think I managed to include explanations of every place these alternate seemings invoke another house-ruled concept, but my usual editor was busy.

As always, comments and criticism are welcome.

The Sessile Ones: A Refinement of Form

November 01, 2017
The Inanimae are among the strangest, most ineffable creatures of the dreaming. Inanimae: The Secret Way is one of my favorite original Changeling texts, but to be honest most of the systems were difficult to understand and often thematically odd. Changeling the Dreaming 20th did a lot to revise the Inanimae, and introduced some concepts that fixed a lot of the old problems with them, but as I’ve read through the chapter a few times I’ve run into some brand new thematic problems and contradictions, and some of the quirkier rules from the original text were included in C20. I have put together a few house rules for my home game to make the Inanimae a bit more approachable, while working to retain the goals that the C20 developers. As I am not one of the C20 devs I might miss the mark and may have misinterpreted the reasons for some of these rules, but I hope my take on these are useful for some of you out there adventuring in the deepest kingdoms of the Dreaming. Simon will be posting …
Read more